The “Process AP Invoices with Rapid Adapt” workflow automates the ingestion of AP Invoices from a hot folder and extracts key index data from the document.  Using GlobalCapture’s Rapid Adapt Forms builder, the first document through the system will end up in validation and require the user to leverage a point and click designer to assign marker’s used to identify the document and the positional location of the data points to be extracted.  Going forward, most subsequent documents should get classified and automatically processed.  Because OCR is never 100% accurate, it should be expected that misreads will happen and a small percentage of future documents will require validation.  The quality of the original, quality of the scan and the font type being read will have the biggest impact to OCR accuracy.

The validation process in this workflow leverages Forms Learning via RapidAdapt.  For details on how validation users interact with RapidAdapt, refer to the documentation for the feature here.

For demo and testing purposes, click here to download an archive of example invoices to be used with this workflow.

To incorporate this workflow into your business process and make edits or perform maintenance, it is important to completely understand how each node comes together.  As such, a node by node review of the as-built workflow is outlined below.  Users that have taken the Certified GlobalCapture Engineer (CGCE) eLearning and Advanced GlobalCapture Engineer (AGCE) education class will have the foundation of knowledge necessary to understand and implement this workflow.

The green Import Node of the workflow determines the location GlobalCapture will monitor to automatically ingest the documents and the frequency at which it does so.

The first blue Set Process Field Node sets workflow default parameters.  The first is a flag used to determine if any page separation will be enabled.  Page separation is used to split pages when multiple individual documents are contained in a single file placed in the hot folder.

The next set of nodes contained within the Separation Configuration group control how documents being processed will be separated, according to the separation flag set earlier.  To avoid issues, changes to these nodes should only be made by advanced users with a deep understanding of how separation works.

The first purple Condition node checks if page count separation will be used as configured in the Separation Flag previously.

The first blue Separate node is used to configure page count separation.  The Page Count attribute determines the number of resulting pages in each document.  A value of 2 will initiate separation after every page in the document. If not the workflow moves to the next purple Condition node. 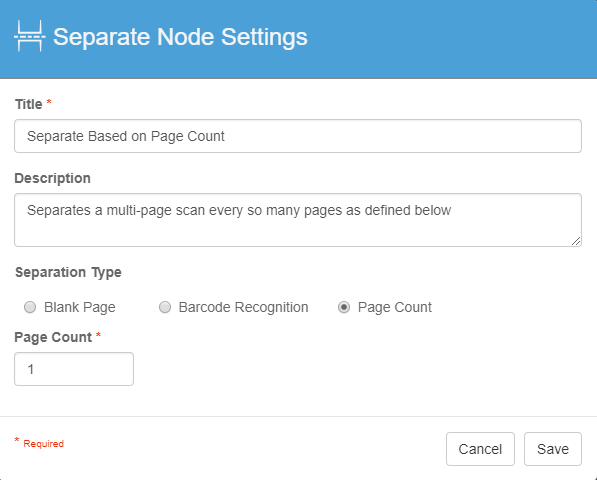 The second blue Separate node is used to configure barcode page separation.  GlobalCapture supports many barcode formats for use in separation. The default configuration uses QR code and DatMatrix formats.  Additionally, so as not to initiate a false positive, a prefix can be used that reads the value in the barcode to find a unique value only intended for separation.  The default prefix looks for the value “SEPARATOR” and will only initiate separation when it is found. 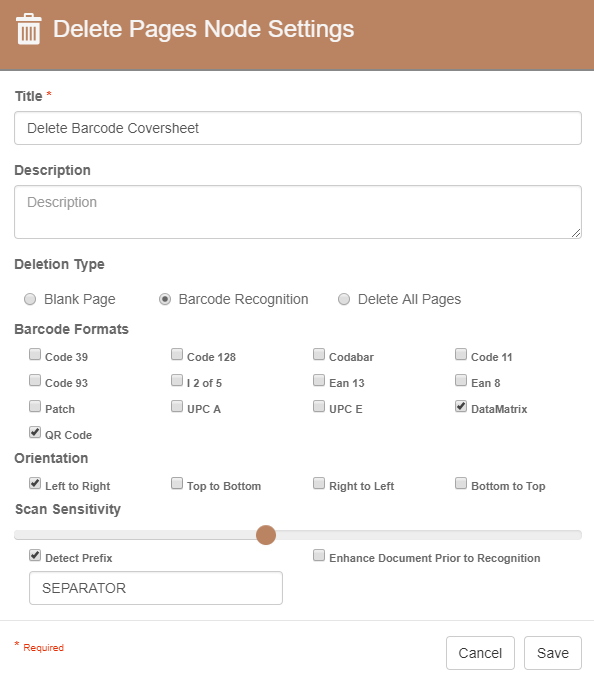 The third purple Condition node checks to ensure there are still pages remaining in the document using the Page Count system field.  This is best practice whenever using the delete pages node as downstream errors can occur when trying to process a zero page document.

If pages remain the workflow moves straight to the classify node.

The Classify node is used to initiate OCR extraction on the document with predefined templates.

When leaving the Classify node, documents that match an existing template will follow the Classified path.

A number of data clean up rules will work on the Amount field in the next blue Set Process Field Node.  These rules are in place to normalize data extracted via OCR and include removing spaces, dollar signs, decimals read as commas, and commas read as decimals.

The orange Release Node is used to release the document into your GlobalSearch Business Essentials database Accounts Payable archive.

The red End node signifies the end of the GlobalCapture process.

Please note, these errors can depend on your browser setup. Learn more